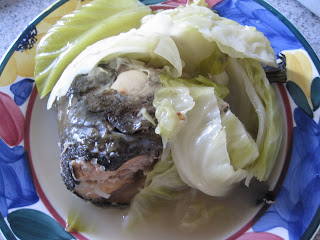 I was craving for fish soup yesterday and I remember I had several fish head for fish soup. But then I don't have the right vegetable to mixed with it. So what I did I just figured out another ways, instead of bokchoy for leafy vegetable, I used the cabbage. For the seasoning I still do have the knorr sinigang mixed and my ginger and lemon grass paste.
I boiled the water first and when it's boiling I put the fish head. I let it boil again and then I put the cabbage and seasoned it as well. I let it boiled again but turn the heat to med/low. The fish gets cooked fast that's why you don't have to put a high heat. When the cabbage is done I seasoned it with salt and  pepper then it is done. I was so happy I got my craving for fish soup satisfied that day. Even if I don't have the right veggies into it but at least I had the fish, lol!! What about you guys what have you got yesterday? Anything that made you crave so far?

This looks so yummy, Kim. Now you are making me crave for it too....Christine