This year I started to plant more herbs. One that I planted this year is Lemon Verbena. 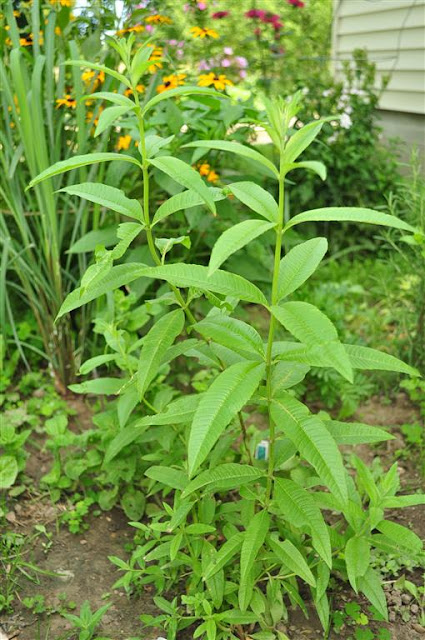 Here is what I found for  the use and profile of Lemon Verbena.

Lemon verbena, sometimes called vervain, is generally acknowledged to be the most strongly scented and intense of the lemon scented plants. The scent has moved writers to poetry and prose in an effort to describe its essence, which is both crisp and relaxing at the same time. Because of its scent, lemon verbena is used in making perfumes and toilet water, as well as a flavoring in baking, jelly and preserving. The flavor of lemon verbena has been likened to a cross between licorice and camphor, and it is widely used as an herbal flavoring to replace oregano, particularly in fish and poultry dishes. Lemon verbena was introduced to England in 1700s, and found a comfortable home there, where the deciduous bushes sometimes grow to fifteen feet in height. The plant has an incredibly strong minty-citrus scent that is quite powerful when harvested fresh, however the dried Lemon Verbena is less over-powering and more subtle. It is native to Chile and Peru, but grows quite contentedly in other places. It is used medicinally, as are many other plants with mint or camphor content.

oil of verbena, contains -citral, -citral, methyl heptenone, carvone, l-limonene, dipentene, linalool, -terpineol, borneol, nerol, geraniol, and other constituents. All of these are present in less concentration in the leaves and flowering tops most often used for tea.

Leaves and flowering tops are used in tea infusions, either fresh or dried

Tea infusions either hold or cold, and seldom found in food and capsules.

Tea made of lemon verbena has been used to soothe colon and stomach spasms, lower fevers and calm itching. It has a relaxing effect, and can help ease muscle tensions. As a culinary flavoring, lemon verbena has been used as everything from ice cream flavoring to pepper substitute. The licorice and camphor content do make the volatile oils from the plant stronger than most other lemon-scented herbs, so it?s advised to use it sparingly as a flavoring.