Food freedom alert: Bureaucrats in Michigan threaten woman with jail time for planting vegetable garden in her own yard 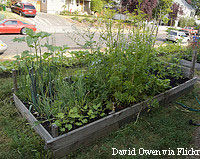 (NaturalNews) The anti-food tyrants are at it again, this time threatening a Michigan woman with fines and jail time for her "crime" of daring to plant tomatoes and peppers in her front yard. Your help is needed to take action and fire off an avalanche of complaints against the local bureaucrats in Michigan who are threatening this woman (see action items below).
This story involves a woman named Julie Bass, whose front yard was dug up during sewer line construction. After the construction project was completed, instead of planting grass, she thought it would be far more practical to planta vegetable garden. Watch the brief news reports on this at:
http://www.naturalnews.tv/v.asp?v=1...
http://www.naturalnews.tv/v.asp?v=0...

Vegetable gardens not only provide organic, high-nutrientlivefoods to those who grow them, studies have also linked gardening to enormous health benefits such assharp reductions in the risk of breast cancer(http://www.naturalnews.com/025280_c...) and even lung cancer. They also create an environment offood securitywhile promoting eco-friendly practices. There's no food that's more "local" than the food grown in your own front yard, right? It's good for public health, great for the environment, and fantastic for teaching children useful skills that get them out of the house and away from the X-Box.

Thou shalt not grow food in Oak Park

None of this seems to matter to Kevin Rulkowski, the city planner for the city ofOak Park, Michigan. With a nasty arrogance that seems to be increasingly common among ignorant bureaucrats, he complains in a video news report that Julie Bass's garden is in violation of city code and Julie has to dig up her entire garden or face punitive enforcement actions by the city (which could include jail time).

City code says, "All unpaved portions of the site shall be planted with grass, shrubbery or other suitable live plant material."

But city planner Kevin Rulkowski, who really just comes off as anarrogant bullyin his attacks on Julie Bass, proclaims, "If you look in Webster's dictionary, suitable means common. And you can look all throughout the entire city and you'll never find a vegetable garden that consumes the entire front yard." (http://naturalnews.tv/v.asp?v=1D577...).

Hold on a minute, Mr. Rulkowski.Suitable does not mean "common."Suitable meansappropriate within the context in which it is being used. Check any dictionary and you'll see the definition of "suitable" being either "appropriate" or "proper."


Even the Webster's dictionary Mr. Rulkowski quotes in his news report doesn't define "suitable" as "common." It defines "suitable" as "proper, able, or qualified" and gives examples such as"The dress was a SUITABLE choice."

Well what could be more suitable to a family with a yard than teaching children how togrow some of their own foodright at home? That's suitable! It's the most suitable (and natural) thing in the world, in fact. What'sweirdis to grow nothing but grass and then spray your lawn with toxic chemicals to kill all the weeds, and then mow the lawn every week burning up fossil fuels and polluting the air just to keep your lawn manicured. That's bizarre (and terrible for city air quality, by the way).

Gardening, on the other hands, is eco-friendly, health-friendly and great for the air quality of the city! What could be more suitable to a city than people growing more of their own food right at home, right on their front lawns?

Mr. Kevin Rulkowski, who can't even get his dictionary definitions straight, maintains his arrogance: "I told her don't do it. And she went ahead and did it anyway." As if Julie Bass is somehow supposed to grovel at this bureaucratic parasite's feet and lick his boots because he pretends to be in a position of authority.

Kevin Rulkowski is like every other mindless bureaucratic tyrant running around America or any other country: They are useless parasites on society who actuallyharm peoplewhile collecting public dollars as their own wages! The city of Oak Park, Michigan would be better served by firing this anti-gardening P.R. disaster before he gets any bright ideas such as banning fruit trees or edible flowers. As a spokesperson for the city of Oak Park, the guy is a shining example of how tonotconduct public relations.

He also just looks kind of heartless and mean, you know? ...As if he's been living on processed junk food and hot dogs. I guess for a paper-pushing bureaucratic whip cracker, that's a "suitable" diet, eh? But growing your own food isn't suitable at all in his mind. Of course, he's perfectly fine withpavement. Lots of pavement. You can't havelivingvegetables in your front yard, but you canpave the entire yardand he's be fine with that! (Seriously, what kind of pathetic, hate-filled anti-lifer prefers pavement over fresh, living garden vegetables?)

So now Julie Bass is facing a jury trial and possible jail time for daring to stand up to the tyranny of miscreants like Kevin Rulkowski. The trial begins in a couple of weeks, and the outcome remains in doubt. (You can help, see below.)

If you haven't already, watch this video on NaturalNews.TV to get the full story:
http://www.naturalnews.tv/v.asp?v=0...

My take on this is so sad to know that you can't do anything in your own property. For the fact that this woman is trying to grow her own organic food and with that she can save money ,why not? With the economic crunch that we are facing now planting our own food is necessary to survived. Yes, her front yard is different with the other neighbors but who cares, in the first place it didn't bother anybody. In fact, this can serve a lesson that we just don't let our land lay there with out doing anything, yes growing flowers is good and nice to look at but can WE EAT IT? Why not plant vegetables? Threatening this woman because of this is way out of my scale. The "suitable" word made me laugh. Is he kidding when he say this word? Suitable to his liking or what?
I love her garden plot. I would definitely love to have those in my own yard too. For now my plants are in the ground but next year will gonna have a lot of those.
What about you people? Is the city planner is wasting money and time for this matter? Do you think it is okey to plant your vegies in front of your house? What you think let me know. Ciao!

Email ThisBlogThis!Share to TwitterShare to FacebookShare to Pinterest
Labels: michigan

I think it is sad too, that the city is wasting time and money on something so minor. It's not like they are planet haphazardly around the yard they are in nice planters boxed in, maybe she could paint it green? They look as good as any other plants. You should see some of the yards that we have down here in Florida, some make us ask...really? :D

I encourage everyone to write to Kevin Rulkowski: krulkowski@ci.oak-park.mi.us